Whilst, Israeli drivers don't have a great reputation, but renting a car and driving in Israel is a convenient and generally easy way to get around in Israel. Israel has a great, modern road network which spans the width and breadth of the country which are signed in English as well as in Hebrew and Arabic making navigation easier for visitors. Israel drives on the right hand side of the road (like most of Europe and the US), and there are GPS and maps available in English. Driving and renting a car in Israel is a great choice if you will travel between cities, and especially to areas that have less frequent public transportation options. Places like the Dead Sea, the Negev in southern Israel and the Galilee in the north.

Israeli Drivers: We have to mention something about Israeli drivers.

Most drivers in Israel don't have a lot of patience. They will beep their horns more than you are probably used to, especially if they are annoyed by the behavior or speed of others. You may need to be a bit more aggressive when you are, for example, changing lanes. You may prefer to stick to the right lane if you are not driving near the speed limit.

Here are the important driving rules and regulations if you plan to drive in Israel:

-Driving in Israel is on the right side of the road, like in the US.

-There are no turns on red, neither left nor right. Turns usually have dedicated turn lights.

-Traffic roundabouts are very common. You have to get to the cars that are in the circle.

-U-turns are allowed unless there is a sign indicating otherwise.

-Traffic lights either blink or flash red or yellow in between red and green.

You can see your allowed speed limit  on signs along the roads in kilometers per hour. You will receive a ticket if you exceed the speed limit at 10% and more. Generally, the speed limits are as follows, unless elsewhere on the way:

If you can, you can get a ticket on-site at a police officer or it will be issued based on the speed cameras all the time on the major highways. Israel has many speed cameras installed, but in a recent (2018) ruling, many have been declared inaccurate and therefore illegal, for now.

Talking on a mobile phone without a hands-free system is prohibited, even at a stop light. Mobile phones are the biggest cause of traffic accidents in Israel, so you get a very big fine - in thousands of shekels!

The drinking and driving limit is much lower than in most other countries, so we seriously recommend that you do not even have a drink if you drive in Israel. 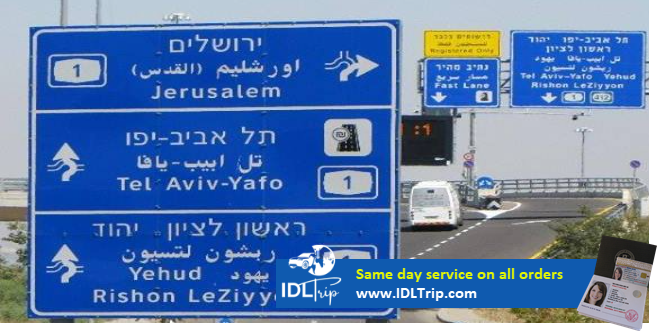 More Tips to Keep in Mind

-Israel has a relatively large number of road accidents on certain roads, especially when there is no barrier between lanes. So drive with caution.

-If you drive in the desert area during the winter and jump, check for flash flood warnings for the areas where you plan to drive. They can be quite dangerous in the desert.

-When driving around, be aware of bikers on their way, especially in the big cities. Many people ride bikes and lots of kids use electric bikes.

Parking in Israel varies greatly from place-to-place. It is generally not a problem, however, can be tricky in the major cities, especially in Tel Aviv and Jerusalem. In these cities in particular (but across the country) parking is enforced on the road fairly strictly, and it is simple to establish whether parking is allowed from the color of the curb. Whilst these regulations are pretty general, and different municipalities can use them in different ways, they are a good general guide, however, be sure to pay attention to signs and if in doubt try to ask! To avoid all doubt, however, it is often easiest to find a car park where you can pay when you are finished and you save the hassle of searching around.